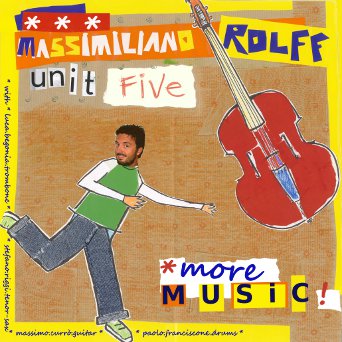 2012
Massimiliano Rolff
BlueArt
Producer: Rosario Moreno
Number of discs: 1
Buy from Amazon
Spotify
1.In the narrows
2.Four in a room

All compositions and arrangements by Massimliano Rolff

When I think that there’s a group of passionate listeners out there who are waiting for “more music” I consider myself to be a lucky person … well, I’m out there too, and that is why I feel this desire, which gets me going, day after day, hour after hour, and it makes me feel good. I know and I remember every single precious moment when I conceived the melodies for this album, sometimes quickly scribbled down on scraps of paper, other times written out properly in a note book, and at times not written down at all but simply kept in my mind until safely noted down on a sheet of paper or on my pc, maybe days and miles away from the initial inspiration. Those are moments of euphoria, the world around you seems to be dozing and you are in total communion with your wishes, and you can create a sparkling, strong and smiling sound. I wrote this music, thinking about my wonderful quintet of musical friends, about the energy created on stage during our concerts, about how, to my constant great surprise, we find ourselves so tightly united on cues. My creative partners have the ability to move carefree in their solos, while using a rigorous and consistent language, as is Jazz today. This recording, apparently, does not open new paths, but there are forty-three minutes and six seconds of bouncing music, something that grows and develops through a complexity that is meant to go directly to your heart and soul in the simplest way, and I bet you’ll enjoy it. It’s just … “More Music” … but we need it.